Here’s a review I wrote for the local Bristol culture magazine, Bristol 24/7. I live only a few minutes away from the Stag and Hounds, so having excellent bands like these play there is absolutely excellent for me!

Your radio may be droning out an assortment of forgettable songs from this year’s X-Factor winner but in the heart of Britain’s music venues something is brewing; there’s a new generation of bands building their own music scene out of sight of the mainstream media, and legendary Bristol music venue the Stag and Hounds is right at the centre of it. Two brilliant new bands performed here and tore the roof off, showing that the Bristol music scene is alive and kicking!

“Memory of Elephants” are a fine home-grown Bristol trio who fuse complex math rock with thunderous, near-sludgy towers of noise. Though their songs are long and complex they manage to avoid the usual math-rock trap of putting musical tricks before quality songs, and demonstrate both their musicianship and songwriting talents to equal extent. Their set is for the most part raucous, raw and reckless – unfettered math-rock with a primal, organic element that sets them apart from the rest of the scene. They are also stonkingly loud, and this presents a problem; once they’ve turned up to 10, there is no 11, so it feels like they are straining against the ceiling, trying to push louder and louder when there’s nowhere else to go. Still, the crowd are fully engaged and heartfelt cheering follows each new song. 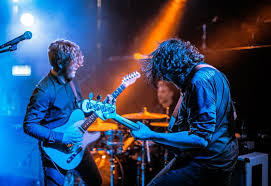 Liverpool three-piece “Alpha Male Tea Party” are tonight’s headline act, and the crowd is ready and waiting for them from the very first note. The whole pub is onboard and involved, singing along with the guitar, shouting and clapping in all the right places – it feels like we’ve all been waiting for our favourite band to start playing, and the excitement is palpable. This tour is the warm-up for their new album and features a set of fresh tracks with unforgettable titles like “Nobody Had The Heart To Tell Him He Was On Fire”, confirming that AMTP do indeed have all the best song names. Their new material also maintains their excellent ability to tread complex new ground whilst retaining a defined musical style and sensibility; this is math-rock with heart, soul and balls!

They follow their “New Song suite” (as their guitarist puts it, tongue firmly in cheek) with some old favourites including “Truffles” and “You Are My The Rock”, before closing out their set with “Athlete’s Face” from their latest album. They say their goodbyes, but the crowd are having none of it; as the Stag and Hounds erupts with demands for more, suggestions are shouted back and forth until the band agree to play “Boris Bike Briefcase Man”, to the crowd’s delight. Five more minutes of intensely precise riffage ensues until the band, pouring sweat, call it a night and leave the stage, to passionate applause and cheers.

It’s reassuring to see that despite a crumbling record industry and frequent venue closures, Britain is still turning out top-notch bands in a vibrant, lively music scene. You can find Memory of Elephants online at memoryofelephants.bandcamp.com, and Alpha Male Tea Party at alphamaleteaparty.bandcamp.com.